The Swampfox Arrowhead LPVO series meets or exceeds every requirement for serious law enforcement and self-defense applications. Locking turrets require no tools to prevent unintentional adjustments. Arrowhead’s state-of-the-art optical design creates a brighter sight picture, a wider field of view, and excellent resolution. Choose from two Second Focal Plane reticles: Guerrilla Dot BDC Long and Guerrilla Dot MOA Long. If you are searching for an affordable LPVO that checks all the boxes needed for duty use, you just found it: the Swampfox Arrowhead.

The Swampfox Arrowhead LPVO series meets or exceeds every requirement for serious law enforcement and self-defense applications. Locking turrets require no tools to prevent unintentional adjustments. Arrowhead’s state-of-the-art optical design creates a brighter sight picture, a wider field of view, and excellent resolution. Choose from two Second Focal Plane reticles: Guerrilla Dot BDC Long and Guerrilla Dot MOA Long. If you are searching for an affordable LPVO that checks all the boxes needed for duty use, you just found it: the Swampfox Arrowhead.

Designed from the outset to be duty grade, these 1-6x, 1-8x, and 1-10x Low Power Variable Optics are ready for the most serious law enforcement, competition, and hunting applications. Meet the Arrowhead.

Second Focal Plane construction provides a consistent reticle size at all magnifications. The result is an instant, familiar sight picture for unbeatable speed when it counts most-- from close quarters distance out to 200 yards.

Arrowhead features push-pull locking turrets that require no tools and can be quickly used out in the field. Push the turrets towards the scope body to lock them in place. Pull them away from the scope body to adjust. Real simple, real tough. No more worries that a turret got "bumped" away from its zero when you weren't looking. 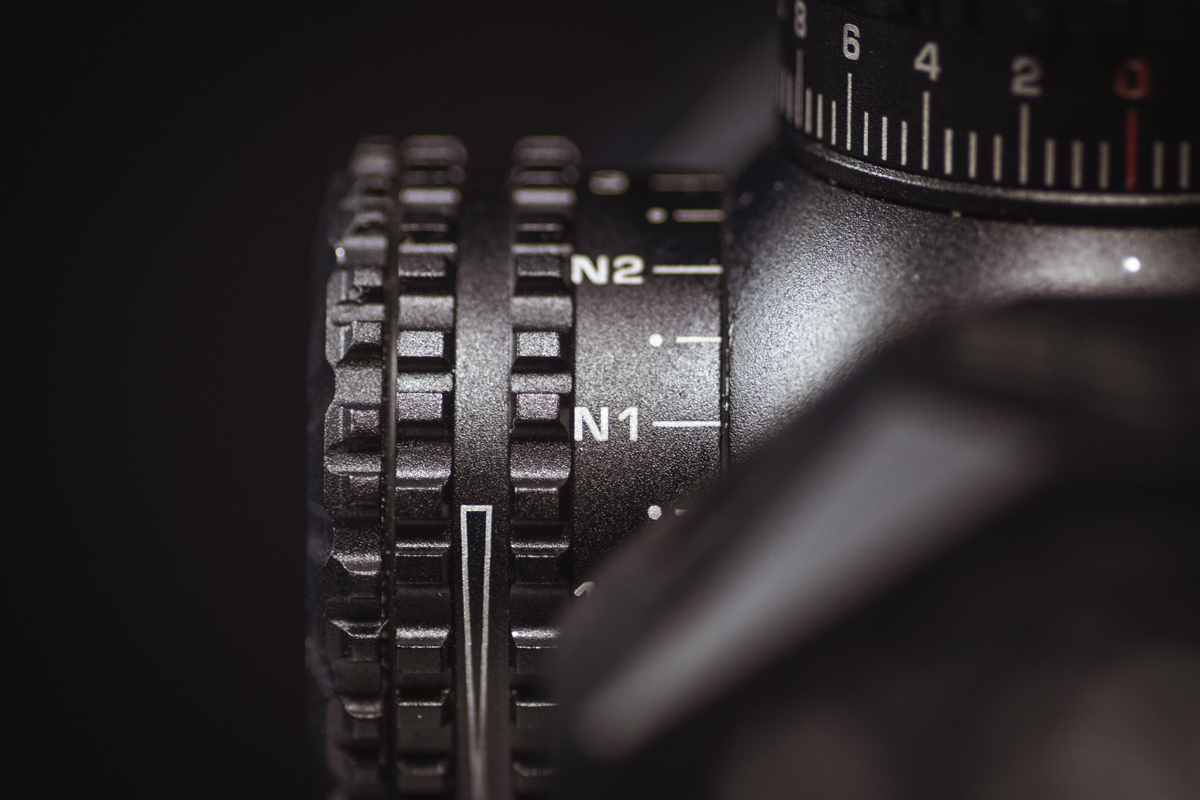 Arrowhead features dual LED emitters, making daylight bright etched reticle illumination possible at the highest settings. For those who must press on in the darkest night, the first two brightness settings are night vision compatible and cannot easily be seen by the naked eye at all. Arrowhead's illumination knob features a tactile "OFF" notch between each of the 12 brightness settings.​

Great glass is just the start of what makes a truly superior sight picture. Arrowhead's optical engineering, the math that dictates how the lenses transmit the light through Arrowhead, is state of the art. You'll see the difference as soon as you look through Arrowhead—at any magnification. ​ 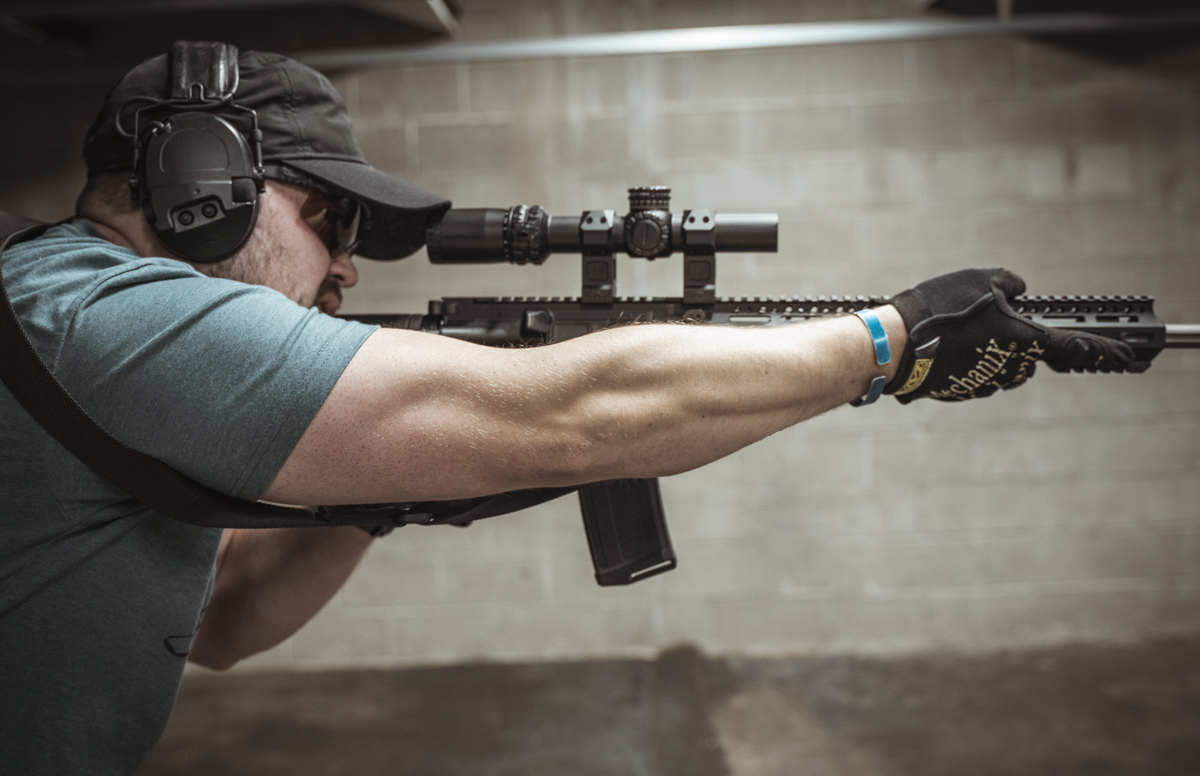 GREAT GLASS IS JUST THE START​

This is the best glass we know how to make, carefully infused with rare earth metals and polished to perfection. Only the most immaculate lenses are worthy to move on to the next step. The best anti-reflection, anti-fog, anti-scratch, and hydrophobic coatings are then applied and checked carefully before lens installation.​

Arrowhead's advanced optical engineering results in a wider field of view and superior overall brightness, without sacrificing eye relief or eye box characteristics, even at full magnification. You get it all with Arrowhead. 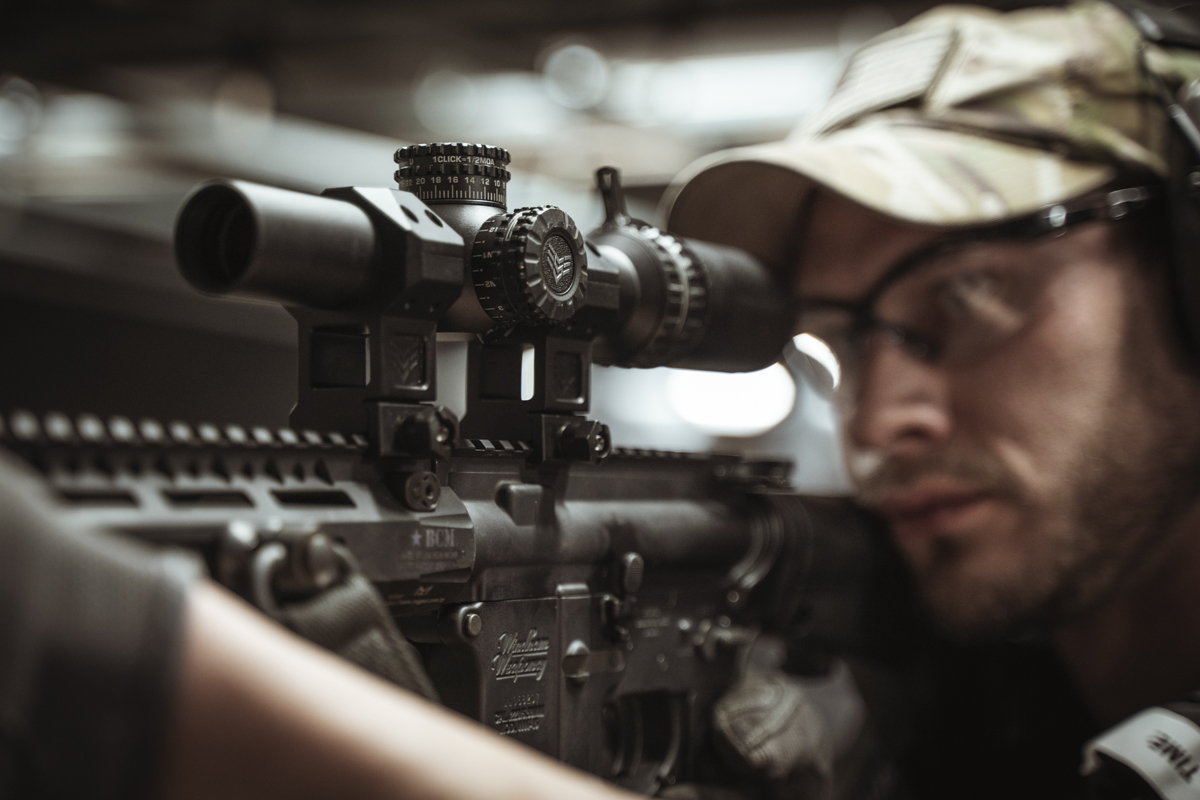 SPEED IS FINE, ACCURACY IS FINAL ​

Arrowhead's fast focus eyepiece, excellent optical characteristics, and user-friendly controls make it a very "fast" scope for close quarters shooting. As range increases, more precision is required. Arrowhead's turret tracking and reticle fidelity is excellent. From the flat, true 1x all the way out to 6x, 8x, or even 10x magnification, Arrowhead excels in a huge variety of real-world shooting situations. ​ 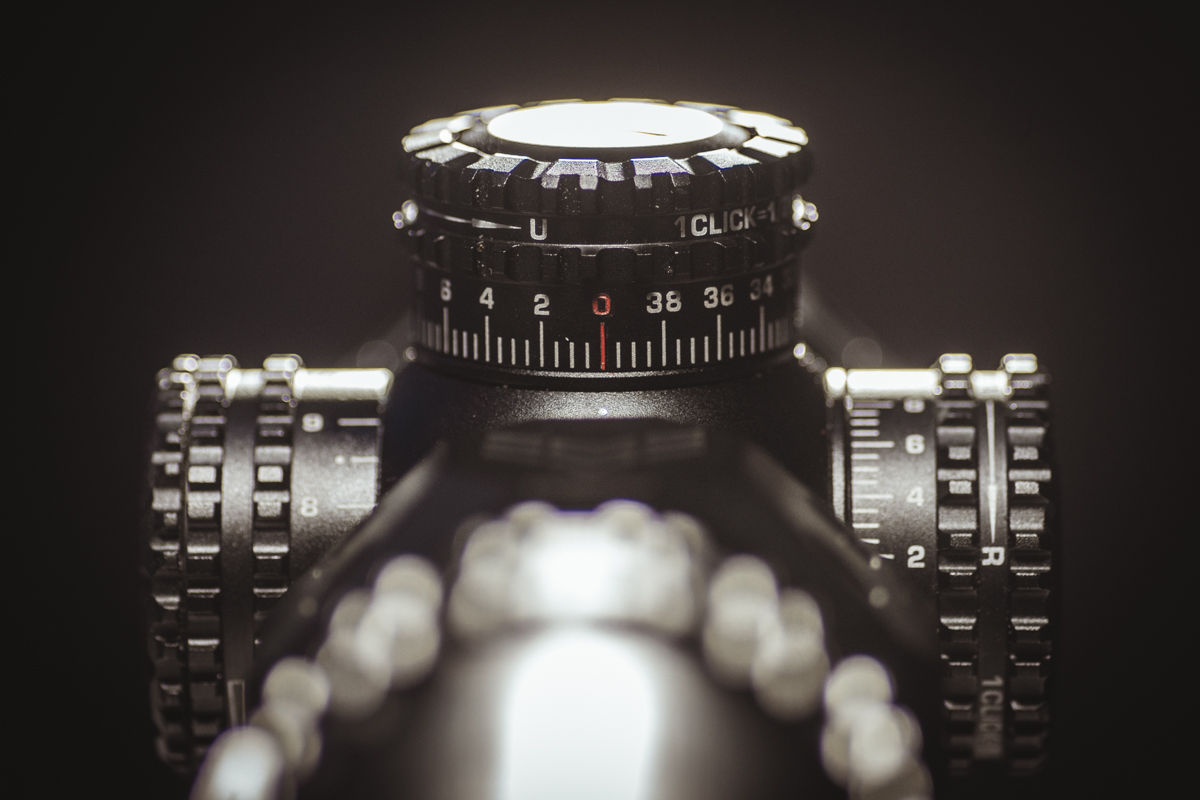 After sighting in your rifle it is easy to reset "zero" indication on the turrets using just a coin or wide screwdriver to release the outer turret and re-orient it. This very important feature can be adjusted in seconds without affecting the push/pull locking system at all. ​ ​ 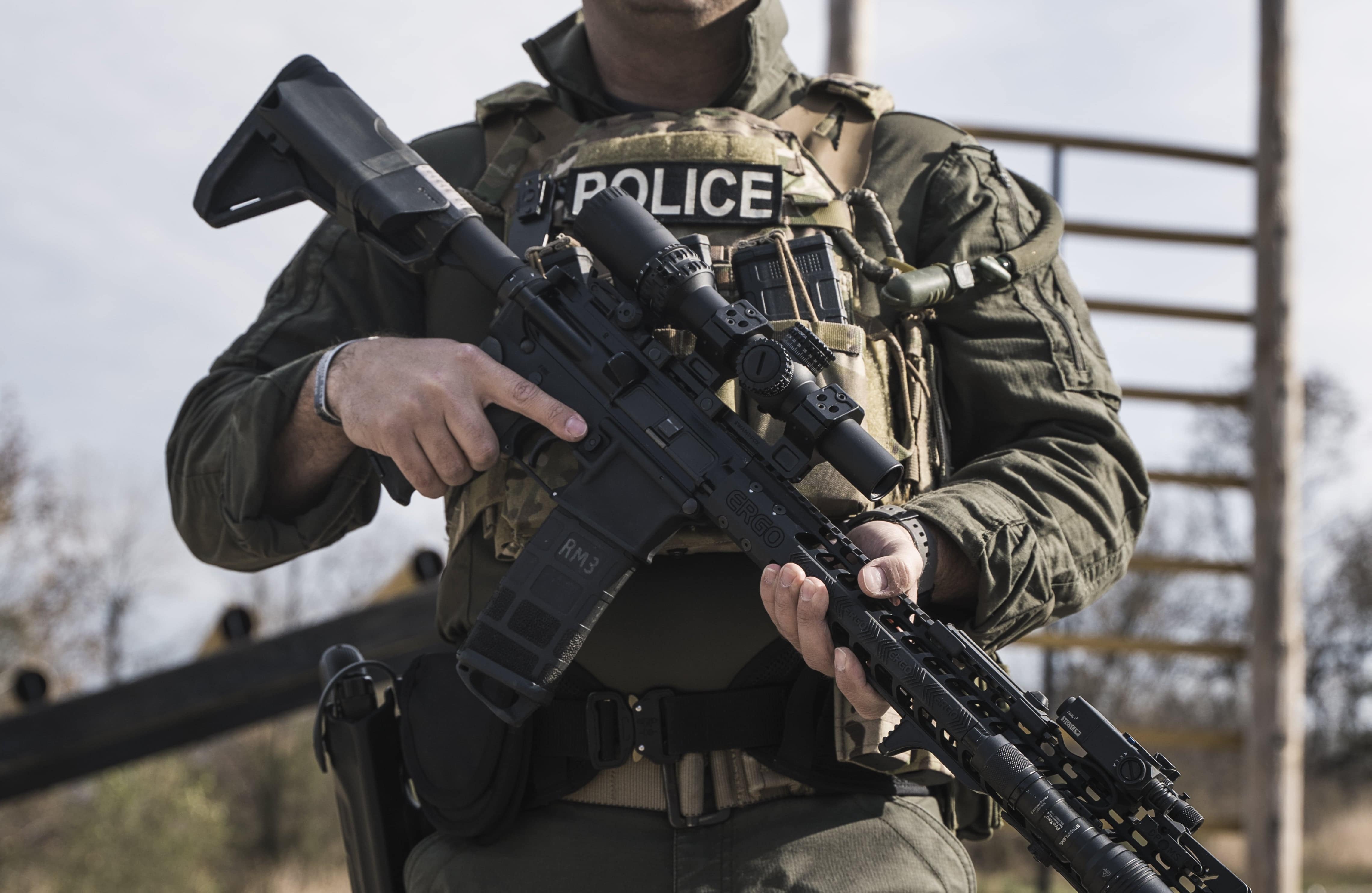 Arrowhead's internal components are made of stronger materials and machined to the finest tolerances we can achieve. Even the main scope body is machined from a harder grade of aluminum. Toughness and precision are both increased at the same time, without sacrificing one goal to boost the other. ​

Not shooting 5.56 or .308? "Guerrilla Dot MOA Long" has you covered. A full 30 MOA of vertical holdover ladder is incorporated. Chrony your rifle, run your numbers through a ballistic calculator, and see how far you can stretch it. Can you take your 6.5 Grendel to 900 yards? Can you take your 6.5 Creedmoor to 1000 yards, with a 1-10x LPVO? Arrowhead's MOA reticle is ready if you are. ​ 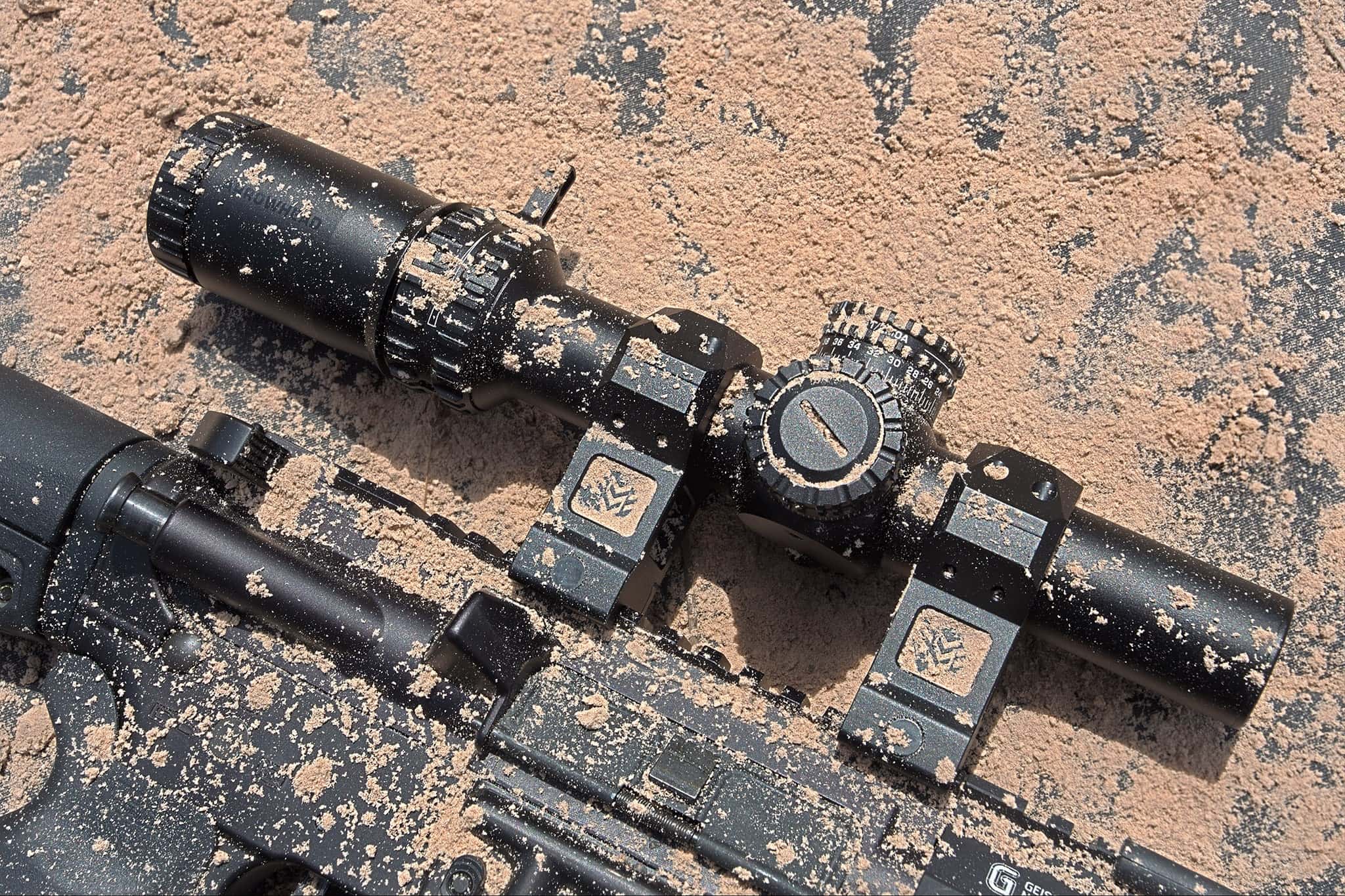 We designed and built Arrowhead for use in the most serious situations. Law enforcement patrol rifles, home defense carbines, defense of livestock from predators, hunting dangerous game, and more. We know that some of our customers will take Arrowhead into harm's way. Arrowhead's durability is our best statement of taking that responsibility extremely seriously. ​

Of course, like all Swampfox produts, Arrowhead is backed by our 50,000 Round Guarantee. ​

The Guerrilla Dot BDC Long is highly versatile, capable of delivering rapid target acquisition at true 1x magnification, while also providing holdovers for mid- to long-range shots. Bullet drop subtensions are designed to work with the optic at its highest magnification. The center dot and its corresponding zeros can be used at any magnification.​

Guerrilla Dot BDC Long was designed primarily for the AR platform using the 5.56 NATO trajectory, based on the following ballistics parameters:​

The Guerrilla Dot BDC Long reticle can be used to estimate distance to target based upon various reference points.​

Guerrilla Dot MOA Long is a Second Focal Plane reticle, meaning the reticle will always appear to remain the same size as the scope's magnification is changed from minimum to maximum. As you increase the magnification, the target will appear to get bigger while the reticle remains the same. Therefore, the MOA measurements on the reticle are only accurate and "true" at the highest magnification setting.​ ​

Installing the included throw lever onto your Arrowhead scope makes it easy to ensure that you have reached maximum magnification before using the MOA markings as holdover aiming points.​

The Guerrilla Dot MOA Long reticle can be used to estimate distance to target based upon various reference points.​

In order to range targets or objects with Sharpshooter MOA, use the MOA ranging formula:​

In order to obtain an accurate range estimation, you need to know the size of the target in inches. Using either vertical or horizontal hash marks, measure the target dimensions in MOA as you view it through the scope. Multiply the target’s actual size in inches x 95.5”, then divide that result by your MOA target dimension observation to get the range to target in yards. ​

Assuming this combatant is 6 feet [72 inches) tall, and his body length comprises 15 MOA in your reticle, how far away is he? ​ 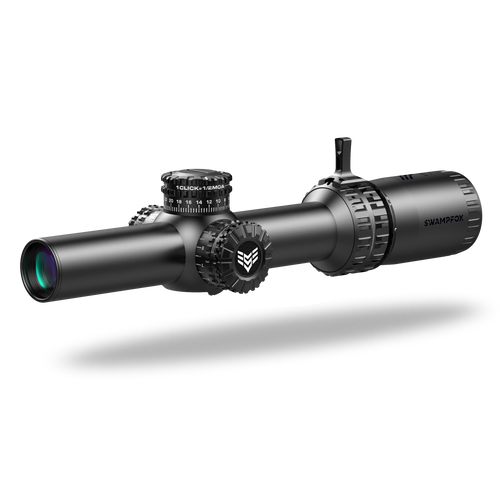